Samba music, and actually all world music, often consists of a number of different musical pieces. Each of those individual pieces can in principle be repeated endlessly, until someone in the band indicates that it is time to move on to the next piece. To indicate when the band members should continue, the band leader blows a samba whistle on which, traditionally, 3 different tones can be played. For example, different signals can be agreed upon, for musical transitions but also for dance steps during a parade.

Meinl SW1 Samba Whistle
Meinl has made this whistle as much as possible in the samba tradition. Because it is important that all musicians hear the signals well, aluminum is used. This material gives a sharp, bright tone, is very sturdy and also durable. With this instrument you can go for years in the most extreme weather conditions. This samba whistle is of course supplied with a sturdy cord for around your neck.

Tips or comments about this product
This instrument is not a toy.
Never blow too hard or too close to anyone’s ears, not even as a joke; this can cause permanent hearing da 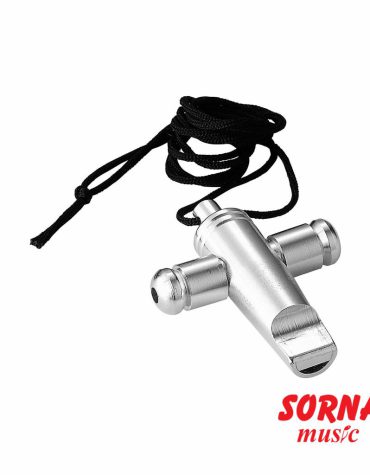